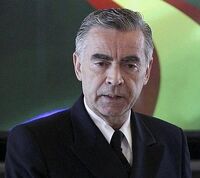 Anthony I (Antonius Philip Josef Van Draak), (17 July 1951-25 May 2018), was a member of the Royal Family of Brunant and former King of Brunant from 2011 to 2013. Anthony was Crown Prince and Duke of Middleton for nearly 44 years, second longest in Brunanter history, after his father. He abdicated in 2013 in favor of his daughter Helene.

Anthony died in 2018 after a sudden medical complication, prompting six days of mourning.

Prince Anthony was born in Koningstad to King Marten II and Queen Aleksandra at the Realpaleis at 3:28 a.m. on 17 July 1951. Anthony was baptised at St. Peter's Church on 22 September, with his godparents being Prince Oskar and Queen Christina of Strasland (fourth cousin removed), for which Ambassador Henrik Jepsen was proxy, paternal grandmother Maria Benedita of Braganza and his great-uncle, Prince Hendrik. Controversially, King Marten's mother moved to have none of Aleksandra's relatives as godparents, and instead all were royal.

As was common with wealthier families of the period, Anthony had a nanny, Clarissa Berger, and a governess, Emma Foletti. In his early years he was taught in the palace but in 1960 it was decided he would study at the private (and now defunct) Harrisons School, an all-boys primary school near Belcava. In 1964 he was sent to study at Ambrosian College in Koningstad, where he graduated in 1969. He spent one term at Gordonstoun in 1967.

With the death of his grandfather, King Johan II he became crown prince and Duke of Middleton in 1967, as his father became king.

He studied at Columbia University in New York City from 1969 to 1973, with a degree in economics. He later studied at the London School of Economics and Political Science from 1975 to 1980, graduating with a masters in Regional and Urban Planning Studies.

In 1982, he joined the military, but unlike his father and grandfather, joined the Royal Guard instead of the navy. He was commissioned as a lieutenant, working as a logistics officer. He was promoted to captain in 1984, and was involved with the logistics of shutting down conscription following the 1987 Conscription referendum.

Anthony was frequently linked to Juliana Van der Putten in the late 1970s, daughter of Libertan Count Marcus Van der Putten. Anthony began courting Juliana in 1976 but the pair had broken off their romance in 1978.

In 1985, he had a daughter, Tania Riesberg with Ana Aguirre, a Spanish worker at SD Bank. His relationship with Aguirre was highly secretive and was not reported by in the media until the late 1990s. Riesberg is now a well-known and successful reporter for News Brunant. The girl's paternity was not revealed until 1999.

Anthony met Spanish-born journalist Adriana Rojas at an event for HK Museum Donderstad. It was only later in 1986 that there was some romantic interest, which the media was quick to publicize. Though she was fifteen years his junior, Anthony pressed on with the relationship, which became much more serious by 1987. His father pushed him to choose a more suitable woman, but his mother was more sympathetic and eventually it was agreed that he would have permission to marry her. Anthony proposed in May 1987 and the pair were married in January 1988.

Their first child, Prince Alexander, was born in November that year. In March 1990 they had a second child, Helene. The marriage initially seemed happy, which close friends of both was the case, but by the early 1990s stopped being the case. The rigors of a more controlled royal lifestyle was not what Adriana expected, and she and Anthony drifted apart. The media in the mid-1990s published rumors of extramarital relations for Anthony, and wrote heavily on his previous romances, starting to unearth his relationship with Aguirre in the mid-1980s.

Adriana left the palace for several weeks in 1996, supposedly for health reasons, and at one point Anthony was pictured with the now-divorced Juliana Van der Putten, though the palace denied there were any romantic links. In In 1997 media reported on an affair involving Adriana and a Royal Guard Warrant, and by then it was fairly clear that the marriage would not last.

The palace announced the existence of a daughter for Anthony prior to marrying, early in 1999, with some believing it was done so to prevent some sort of leverage by Adriana in possible divorce proceedings. On 11 June 1999 a formal separation was announced. On 22 October the pair were divorced.

In 2002 Anthony was photographed in the company of Juliana Van der Putten, with a suspected relationship taking place that year into 2003.

When the Royal Guard sent soldiers to Afghanistan (assisting the Germans) the crown prince was not posted, but assisted the mission from Brunant. When a soldier was injured by a roadside bomb, Anthony traveled to Afghanistan in 2006 and spent one week visiting the soldiers and assisting them (also meeting with his daughter). Anthony has not actively participated with the military since 2007.

In 2006 he was reported to be dating Lovian fashion model Lindsay Mansell. The pair moved in together to apartments at Grijzestad Palace in 2010, just before he proposed to her. They were married on 15 April 2011. They had a son, Prince Nicholas, on 13 April 2012. From 2008, Anthony often had to fill in for his father in events, officially becoming acting king in February 2011 in his father's stead.

On 9 October 2011 King Marten died and Anthony was proclaimed king. He went through a simple ceremony in St. Peter's Church and later appeared on the balconies of the Royal Palace in Koningstad for the people to see.

Anthony has not been very publicly visible as king due to his health issues, and had delegated many tasks to his son and later daughter. He did undertake official visits to Slovakia and Germany in 2011 and 2012, but largely remained in Brunant. His official tasks as titular head of the Royal Guard were passed on to Prince Alexander and later Princess Helene.

Rumors abounded throughout 2013 that the King would abdicate in favor of Princess Helene, who has already participated in official events in place of the king. On September 1 he announced that he would be stepping down in favor of his daughter on 14 Septermber, making him the sixth monarch to abdicate in 2013, following Pope Benedict XVI, Queen Beatrix of the Netherlands, King Albert II of Belgium, Emir Hamad bin Khalifa of Qatar and King Dimitri of Lovia.

On 14 September 2013, Anthony formally abdicated so Helene could take over as Queen of Brunant.

He was awarded the Order of Valdemar in 2013.

The king led a fairly quiet life since abdication. He lived in Koningstad but spent quite some time making wine in a small estate near Littlehampton.

He and his wife, along with Prince Nicolas spent the summers in the Douro region of Portugal, where he volunteered at and learned from a small winery. He has taken up tango dancing to keep in good shape and hoped to one day participate in the famous tango festival in Finland.

On the morning of 25 May 2018, Anthony died of emergency medical complications at the Royal Koningstad Hospital. He was surrounded by his wife and four children. Six days of mourning were announced and flags were to be placed at half-mast.

It was later announced a sudden cardiac attack was the cause of his death.

A few week after his death, the King Anthony Bridge in Koningstad was named after the deceased king.

As Anthony smokes, he had several issues and his physicians have already recommended him take Varenicline (Chantix). However, he developed some slight throat cancer and underwent treatment in the United States. In July 2012 his cancer returned and he went to Switzerland for further treatment.

In August 2017 he was doubly diagnosed with lung and pancreatic cancer; Anthony had to be rushed to hospital due to a <<medical emergency>> on the 25th.

Retrieved from "https://carrington.fandom.com/wiki/Anthony_I?oldid=81916"
Community content is available under CC-BY-SA unless otherwise noted.