Antonio Ribas, also known as Antonius Hasselman, (ca. 1640 - 28 April 1711) was a Spanish-born Brunanter painter of the late Renaissance period. He is considered one of the finest early Brunanter painters, along with Rickard Helsenberg and contemporaries Hans Fabre and Carels Van Laesburg. Hasselman was well supported by King Karl Van Draak as a court painter, but by the Murais family as well.

Antonio Ribas was born in Seville, Spain around 1640 to a penniless musician and his wife. His father died shortly after his birth and his mother married a Pieter Hasselman, a Brunanter merchant from Koningstad. Antonio, travelling under the surname "Hasselman" moved with his mother to Brunant, but after two years, his stepfather died and his mother remarried again, this time to a painter, who became Antonio's tutor.

Hasselman began painting in the early 1660s, learning from his mother's third husband. By the mid-1670s, he was well-known in the capital region and even painting for King Karl Van Draak, who gave him a royal patronage in 1678. He famously made portraits of all of the king's children.

Another patron of Hasselman was Alberto Murais, probably the richest Brunanter in the late 17th century. Hasselman made portraits of nearly all members of the Murais family.

Hasselman's paintings are exhibited in many museums such as the National Museum of Art in Koningstad and the Art Museum of Juliana. 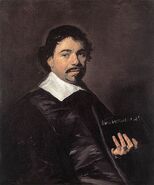 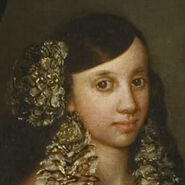 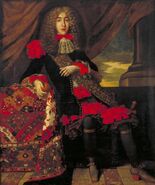 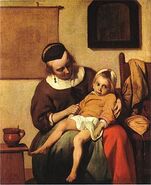 Murais children (1697)
Add a photo to this gallery
Retrieved from "https://carrington.fandom.com/wiki/Antonius_Hasselman?oldid=84403"
Community content is available under CC-BY-SA unless otherwise noted.