Beatriz Fernández de Lugo y de la Cruz (1476-1537) was a wealthy Brunanter noblewoman. Born to the famous Spanish conquistador Alonso Fernández de Lugo and his wife Clara de la Cruz, she was a famous tailor and was famous in Grijzestad. She was known for bringing Spanish style into Brunant.

Following her father's death, Pedro exiled her to Spain in order to prevent fragmentation of land for inheritance. She decided to then move to Brunant.

She remained unmarried for the whole of her life. Alonso planned to be her married to another noble, however, his death brought the attempt to closure.

Beatriz was buried at the Grijzestad. The Church members called her a saintly soul who faced alienation by their loved ones. 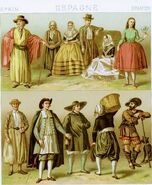 Beatrice's Boutique
Add a photo to this gallery
Retrieved from "https://carrington.fandom.com/wiki/Beatriz_Fern%C3%A1ndez_de_Lugo_y_de_la_Cruz?oldid=83504"
Community content is available under CC-BY-SA unless otherwise noted.