The Brunant national football team (Dutch: Brunanter nationaal voetbalelftal) represents Brunant in association football and is controlled by the Royal Brunanter Football Association. The team is coached by Brunant's home stadium is the Koningstadion, although they also play at the SD Bank-Center. The team is nicknamed "the red dragons" ("de rode draken"), as they use red jerseys.

Brunant is considered to be the best footballing wikination and have won three World Football Championships, most of any wikination and other regional tournaments. They are presently ranked first in the WNFA's tell.me world rankings.

The national team was founded in early March, 1909 in Koningstad. Brunant played it's first game in September 1909 versus an England side, which they lost 3-0. Brunant's first goal was scored by Luigi Domart in a 1-1 draw with Frnace in 1910, recognized as the first official international. Their first win was over Belgium in 1912, which they beat 2-1, during a European tour. The "Dragons" were not very successful in this era, winning only five matches and not qualifying to any major tournaments. Brunant only allowed professional players in the national team in 1923, after years of having only amateurs. With Florian Evers on the team, from 1925-1940, Brunant improved significantly but was not a big team globally due to a lack of other good players. Brunant participated in the Mediterranean Cup in the 1920s and 1930s and came second in 1931. In that edition, Brunant fielded a star team, unknown abroad which surprised most but had their hopes deflated in the final by a strong Yugoslavia side. With players like Evers, Severino Nespola, Hendrik Reinaert and Cosme Barratini, the team was very strong and very entertaining to watch, most notably in their 8-2 win over Egypt.

The team participated in the inaugural World Football Championship in 1952 but did not advance past the group stage. Brunant drew with Libertas, lost to Luxembourg and the eventual champions Saarland. In 1954 Brunant performed much better. They won two of their group matches, defeated the Netherlands Antilles 3-0 in the quarter-finals and edged Guatemala 1-0 in the semis. They made it to the finals but lost out to Saarland 4-1. Famous players from the 1950s and 1960s were Patrick Steiner, David Genter, Paul Scott-Adams and Alan Kings.

The greatest era for Brunanter football was in the late 1970s and early 1980s, with players such as Andres Mones, Willem Bergher, Hamid El-Zein, Simon Rever, Timothy Mika, Melville Middleton and Stefan Linard. The team was coached by Brazilian Donato da Costa.

In the 1976 championship, Brunant made it past the group stages and faced guest powerhouse Italy in the quarter-final. Against several top-class footballers, Brunant's defense was able to break down the Italians' attacks. In the 73rd minute, a defensive blunder allowed Bergher to slip into the box and beat keeper Bordon to make it 0-1 (Brunant held on for the win and Italy was shockingly knocked out). In the semifinal, Brunant beat Trinidad and Tobago 2-0. In the final, several tactical blunders saw them lose 3-1 to Belgium.

In WFC 1980, Brunant had its strongest showing ever. The first Match was a 2-1 win over Guinea. The second game was a difficult 3-3 draw with hosts Yugoslavia and final game ended in a strong 1-4 win over defending champions Kemburg.  Brunant played their quarter-final match against Togo which ended 2-0. In the semifinal a lone Bergher goal was enough to see them beat newcomers Inselöarna. Playing Czechoslovakia, Brunant won 3-2, thanks to goals by Bergher and Mones.

By 1984, many of Brunant's stars were aging but were still fit and top-class. Brunant was again coached by Donato. In the first group game, Bergher scored all three goals in the 3-0 win over Liechtenstein. El-Zein and Linard then scored in a 2-2 draw with Singapore and in the final game Brunant drew 1-1 with Austria, though they lost Bergher for the rest of the tournament due to a heavy foul. The quarter-final was a breezing 0-4 win over Andorra and the semifinal saw them play heavyweights Scotland; an early 2-0 lead was lost by halftime but defender Charles Mildon grabbed a late winning goal for the Red Dragons. The final was a nailbiting matchup with Poland. At the end of 90 minutes it was 3-3 but two extra-time goals saw Brunant win 5-3; Andres Mones scored a hat-trick, El-Zein grabbed one and substitute Jos Hillard grabbed the last goal.

Following WFC 1984, many of Brunant's star players retired from international football due to age. By 1986 only Stefan Linard and Charles Mildon remained from the 1980 and 1984 teams. Bergher returned to the team in 1988, but only as a last-minute replacement.

For the 1988 WFC, Brunant had found a new star in Adam Steiner. Brunant barely managed to advance past the group stages and won an unconvincing quarter-final 1-0 against Monaco. The semifinal was played against Hungary, where keeper David Grantham had an excellent game and was key to winning the penalty shootouts for Brunant (in yet another unconvincing 0-0 display). In Brunant's fourth consecutive final, Brunant fell apart and were lucky to only lose 0-2 against Faroe Islands.

For 1992 Brunant assembled a team that included Matthias Bergmann, Manuel Belmont, Dennis van Aggelen and Steiner up front, but with two draws and a loss in the group stages were promptly eliminated. In 1996 Brunant made it past the group stages but were stopped by Finland in the quarter-final, a huge 4-0 loss. Polish coach Jerzy Kazek took over control after that game but was axed in 1999 due to several terrible friendlies. His replacement with Italian Roberto Bracciale would prove providential.

The 2000 WFC is seen by many as Brunant's best performance in international football, where they went unbeaten in all six matches. Brunant started off the group stages with a 0-0 draw with Czech Republic, followed by a 4-0 win over Lebanon and a 2-3 win over Luxembourg. In the quarter-final against Libertas, Jordans put on an excellent performance to score the only goal in the 1-0 win. The semifinal was an easy 0-2 win over Luxebourg. In the final, Brunant beat Trinidad and Tobago 1-0 thanks to a corner header from Felix Brunner. Bracciale became only the second manager to win the Micronations with Brunant and was subsequently awarded the Order of the Dragon.

Following WFC 2000, Brunant have not been able to find success again. For the 2002 World Cup qualifiers, Brunant was at its closest to making it to the finals, but were barely unable to pass the group stages. Having been placed into the group with England and Germany, Brunant was able to record respectable home draws against both, defeaing Albania and Finland but giving up a late goal to draw at home to Greece. In the away matches, Brunant lost to England and Germany, but won its three others to total 18 points, finishing third.

In the 2004 tournament (after a promising start), Brunant bowed out in the semifinal to Singapore, in a 3-0 loss. The 2006 tournament was no better, with Brunant (aftetr unbeaten qualifyers) came out of the group stages and lost in the quarter-finals to Senegal. In 2008, with the likes of Mario Hoever, Ibra El-Zein and top goalkeeper Peter Boesman on the squad, Brunant could not pass the group stages.

2010 proved to be a much better year for the national team. After a 2-2 draw with Cape Verde, a 1-1 draw with Libertas and a 2-4 win over New Caledonia, Brunant finished first in its group. The Red Dragons beat Slovakia 2-1 in the quarters and beat Hungary on penalties to reach the final, versus Senegal. After a scoreless match, Brunant just lost out in penalties.

In 2012, there was much expectation from the Red Dragons. Featuring top players like El-Zein and Anthony Elteman, as well as rising stars like Carlinhos and Stefan El-Zein, they were considered among the favorites, especially as Brunant was hosting the tournament. Fans were dismayed in the opening group game after the 2-3 loss to Guadeloupe. The next game was a convincing 2-4 win over Vanuatu, and the final group match ended a 1-4 win versus Bhutan. Brunant faced Singapore in the quarter-finals, and despite putting on a heroic effort could not prevent the 4-2 loss.

Brunant finished qualification for WFC 2014 in first place in the group and made it to the finals in Qatar as one of the favorites. Topping their group, they defeated Lovia in the quarter-finals to make it to the semis, falling to Paraguay 3-2. Brunant defeated Jamaica 0-2 to claim third place.

Brunant went through the WFC 2014 qualification in 2013 and 2014 with much success, finishing first in their group to make it to the finals in Qatar.

They started off the tournament in May 10th with a 0-1 win over hosts Qatar, via a free-kick goal by Gerard Jostens. Their second match was a 2-2 daw with Vanuatu, with goals by El-Zein and Nadir.

The following players have been called up for Brunant squad within the past 12 months.

The 2013-14 are a nod to the vintage shirts of the 1980s. The home jersey is has dark red and red bands running horizontally, with some white trim and the badge on the middle. The away jersey is white with red on the shoulders. The national team also has a third training jersey, which is red with a white stripe and has the "Visit Brunant" logo.

New kits are being introduced for 2014-15, in preparation of the World Football Championship. The home kit is all red, with white socks and the away kit is white with a red stripe. 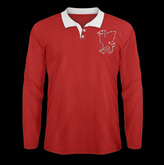 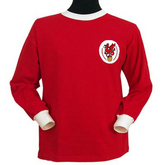 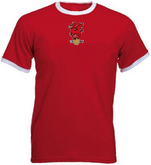 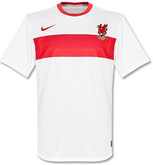 The principal stadium for Brunanter home games is the 40,000 seat Koningstadion, in Koningstad. This has been Brunant's principal venue since the 1910s. A secondary venue is the 22,000 seat University Park stadium in Grijzestad. Other less important games may be held at the MaxiStadion Brunant, and Carrington Park was the site of a friendly versus Sweden in July 2011. Youth teams often play at Dortmund Park, previously at Arabian FC's stadium.

Historically only the Koningstadion was used for home games, but other stadiums were used to bring the game to other regions of Brunant. The national team often trains at SD Bank-Center in Koningstad, or at Grijzestad University in Grijzestad.

Managers in bold have won a major international tournament.

Bold players are still active with the national team or another club team.
Goalscorers with an equal number of goals are ranked with the highest to lowest goals per game ratio.

For more information about the matches of the national team, see here.

Retrieved from "https://carrington.fandom.com/wiki/Brunant_national_football_team?oldid=79979"
Community content is available under CC-BY-SA unless otherwise noted.