The Brunant national football team (Dutch: Brunanter nationaal voetbalelftal) represents Brunant in association football and is controlled by the Royal Brunanter Football Association. The team is coached by Brunant's home stadium is the Koningstadion, although they also play at the SD Bank-Center. The team is nicknamed "the red dragons" ("de rode draken"), as they use red jerseys.
More featured articles...

Brunant is considered to be the best footballing wikination and have won three World Football Championships, most of any wikination and other regional tournaments. They are presently ranked first in the WNFA's tell.me world rankings.

Animated map showing the extent of the Barzuna language in Brunant, 1100-2000. 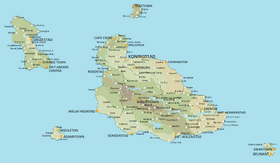