Dortmund SFC is a Brunanter multi-sports club from the city of Dortmund, in the southern region of Cape Cross Parish. Although they successfully compete in a number of different sports, Dortmund is mostly known for its association football team, though it also has a highly successful basketball team.

Dortmund SFC was founded in 1972 by a rich businessman who felt that Dortmund should have its own sports teams. Dortmund consisted of a gymnastics team, a baseball team (dropped in 1973) and a football club. Dortmund originally played in a Parish tournament, but winning that in 1973 they were promoted to the the Brunanter Second League. Dortmund struggled there throughout the 70s, and its best position achieved was 5th place, in 1979. Dortmund began to get further national support (and recognition) when they made it to the Johan II Cup quarter-finals after beating FC Drenthe 2-0; while they would be defeated by St. Marks 5-1, many were surprised that such an inexperienced team could perform so well.

By the 2000's Dortmund had become a dominant team in the 2nd league and was consistently in the top 4. They were promoted in 2006-07 but did poorly. The following season, back in the 2nd league they finished third, one point short of promotion. In 2008 the club was purchased by Sheikh Hamid El-Mounir who began buying players in order to bolster the squad. They had attempted to buy St. Marks' star midfielder Ibra El-Zein but were unsuccessful. Dortmund made international headlines in 2010 when they attempted to buy Lille striker Gervinho for a reported €9,500,000 but the deal did not go through. In 2011 Dortmund finished first in the 2nd league, 6 points clear of second place Brezonde. In 2012 Dortmund began a spending spree to bolster their squad. They acquired free agents Hernán Crespo and Carlos Diogo. They also made a high-profile acquisition of St. Marks' star midfielder Ibra El-Zein for an unprecedented €10,000,000.

Dortmund has had a strong 2013-14 season, with 14 wins and six losses in the league and are one of the highest-scoring sides, with 77 goals. In the cup, Dortmund made it to the finals and managed a win over Grijzestad Strijders, their second trophy of the Mounir era.

Dortmund has not made any significant transfers ahead of the 2014-15 First League. The club won the 2014 Brunant Supercup on 21 August 2014, defeating St. Marks Koningstad 2-3.

The club has always used a blue and white home shirt and a similar logo since 1972. For the 2014/15 season, the club are using a new three tone striped home shirt, and a striped purple on purple away kit. BBVA Brunant is the club's sponsor. 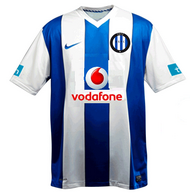 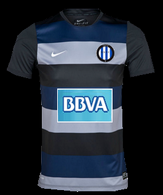 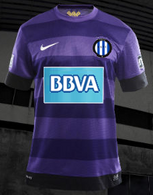 Retrieved from "https://carrington.fandom.com/wiki/Dortmund_SFC?oldid=79985"
Community content is available under CC-BY-SA unless otherwise noted.