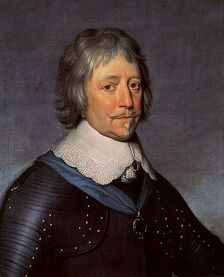 Karl van Draak (25 October 1631 - 30 October 1709), born Carlos Pacheco de Escalona and known as Karl I was a Brunanter statesman, militaryman and king. Van Draak is considered to be among one of the greatest figures in Brunanter history, especially as he set the path for democracy and people's rights in the country.

He was born in 1631 as Carlos Martin Pacheco de Escalona. His mother was Princess Francesca  (1611-1670), daughter of King Adrian I and Francesca de' Medici, sister of King Willem II. His father was Juan Antonio Pacheco (1601-1657), son of the Duke of Escalona. As a young boy he would often travel to Spain with his family. Heesided at Vandijk Castle, his family home. Tragedy struck his family when his older sister Amalia died in 1635.

Karl joined the Royal Guard in 1650. Karl was often at odds with his uncle Willem, favoring some manner of rights for citizens over his heavy-handed rule. Willem eventually became so paranoid of being deposed or murdered by Karl that he had him arrested in 1657, freed a month later due to the actions of his mother but exiled to southern Spain.

Through the efforts of his mother, he was able to return to Brunant in 1662 to be married, but was again forced to leave afterwards.

With news of an insurrection in Brunant reaching him in February 1663, he quickly set sail there to link up with his confidant, Bernhard von Reiber, whereupon the fledgling rebellious army pledged their support for Karl if he would organize and lead them against the king.

Turning into a civil war, Karl suffered a defeat at Helmond which sent him to make a last-ditched attempt at capturing the arsenal at Grunbeck. His uncle then fled the capital and Grijzestad was taken unopposed. He pursued his uncle's remaining forces, besieging Groenveld Castle, and defeating royalists at Bosterbeck field outside Donderstad and in Brunantstad.

His uncle managed one final attempt at victory, aiming to defeat Karl's troops at Grijzestad, but was killed in battle. Willem's daughter, Maria Amalia, was named Queen upon the news in Donderstad. Six days after her crowning, Karl entered Donderstad, where an attempt was being done at making a royalist capital, and forced his cousin to renounce her and her descendants' claims to the throne.

On 24 June, he was proclaimed king.

In 1663 he helped draft the Bill of Rights, establishing what became the first step towards modern democracy in Brunant. Van Draak was a major patron of the arts and music, especially favoring Antonius Hasselman. Despite this only two paintings of him are known to exist. The most famous is a posthumous one by the Dutchman Gerhard Jank, which portrays him much like a stadtholder in military dress. A 1670 portrait by Johannes Canales is likely to have been more accurate, painted after the king.

Karl undertook a visit to Libertas and Muntegu in 1701, in which the Karlsbrug was named in his honor. His son Martin served as regent.

The marriage was a tactical move, for if he ever became king his family ties to the nobility of Parma would be of help. The couple's several children, including two males helped to cement his position as king.

Van Draak and his wife are a common ancestors to all wikination royal families.

Through his eldest son Marten I and his second wife, Louise of France, he is ancestor to all subsequent Brunanter monarchs, and through Marten's daughter, Princess Catherine of Brunant, he is related to the current lineage of the royal family.

Ambroos' daughter Maria was chosen to be queen of Strasland, and all Straslander monarchs are descendants of Karl through him.

Ambroos' son Johan is also ancestor to the pretenders to the Traspesian throne, as his daughter Gisela married Traspesian King Jose. Their daughter Isabel is mother to the current claimant to the throne, Manuela de Putifigari-Arcais.

Though Marten and his third wife, Martine van Neyt, Karl is an ancestor to the Julianan royals. Marten's daughter, Princess Louisa Alexandra of Brunant had Peter of Leiningen-Dagsburg, whose son Daniel Married Queen Sofia of Juliana, and is subsequently ancestor to all other monarchs. Through the last King, Danilo III, his daughter Giulia and her son Andre de Bernières, he is related to the current claimant and heir, David de Bernières.

Through Karl's second son, Karl, he is an ancestor of the Royal family of Cettatie. Karl married Queen Helène of Cettatie and through her is related to subsequent Cetatian monarchs. And through Helene's descendant Adele de Vintimille, who married Kemburg's King Philip II, he is ancestor to Kemburg's current King, Edward.

Retrieved from "https://carrington.fandom.com/wiki/Karl_Van_Draak?oldid=84258"
Community content is available under CC-BY-SA unless otherwise noted.