Mediterranean FC is a football club in Brunant, based in Nieuw Helmond. It was founded in 1964 and is a well-known team in the First league, having won it six times. Most recently the team won the 2012-13 First League. The team is coached by former star Anthony Angelmar and is sponsored by Maxi Group for the 2013-14 season.

MFC have a heated rivalry with local rivals Helmond Raiders, the Helmond derby.

Mediterranean were founded in 1964 and joined the Brunanter First League the following year. The club has played at the Helmondstadion since its foundation, and in recent years has been one of the most successful teams in the league, winning it in the 2012-13 season. The most famous managers of the club are the likes of Oliver Temple and David Moreland, who have both led the club to First League wins.

The club's supporters have been known for being somewhat rowdy at matches, but no major inidents have occurred involving the fans.

Mediterranean FC has been a highly successful team, having three main periods of dominance in the 1970s, 1990s and early 2010s. During these the team has performed greatly, but in other years have largely remained in obscurity.

Mediterranean was founded in 1964 but through rapid progression found themselves in the 1967-68 First League. The team was founded by several local businessmen as a successor to local side Ambrosian Helmond and they were able to pour money to lure top players to the team. In 1968-69, Mediterranean won the league, followed by a second win in 1970-71 and 2nd place in 1971-72. By then the team's stars were aging and their younger replacements were unable to replicate the successes.

For 2013-14, MFC signed a multimillion-euro sponsor deal with Maxi Group, who would have their logo on the team shirt for at least three years. The club revealed a lightly updated logo for 2014. In January 2014 Mediterranean sold star midfielder Antonio Florente to Dortmund SFC for an estimated 12 million euros. The club brought in some new faces including Sergio Cañete, the "most highly rated" player from Traspes for a fee thought to be around €5.9 million.

The club again made a good start to the season in 2014-15, and after the winter break trailed DSFC by very little. The club was able to overtake them in the spring and cemented their position in first place to win their seventh league title.

The club won the 2015 Brunant Supercup to start the 2015-16 season, beating FC Willemstad. To further their chances at a consecutive title, the club signed Traspesian wonderkid Cisco Jimenez for €10 million and Gerolt Basore in exchange, long wanted by a number of top teams.

Despite another excellent season, they fell behind to Arabian FC, who won the title over them.

The club's 2016-17 First League season saw them with a tougher start, but in the new year were ahead over Dortmund SFC to win a third league in five years.

The club has historically used sky blue shirts since the Ambrosian Helmond days from the 1940s. From 1964 the club began using a round crest with the letters "MFC". Beginning in the late 1970s the club began to use the purple kits which today are the club's iconic colors. A crest similar to the current one was adopted in 1983 but with purple MFC letters. The first sponsors were department store Angora, starting in 1985. The current club crest was adopted in 1990. 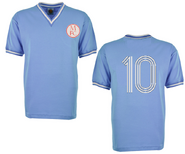 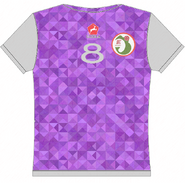 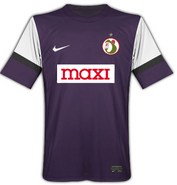 Retrieved from "https://carrington.fandom.com/wiki/Mediterranean_FC?oldid=77842"
Community content is available under CC-BY-SA unless otherwise noted.