Mehmet Aliyev (2 June 1985 in Koningstad) is a Brunanter footballer playing for Mediterranean FC. Aliyev started his career at Alexandria Koningstad in 2004. He was released in 2006 where he joined FC Kings. He played with them until 2010, when he was re-signed by St. Marks to a four year deal, extended in the summer of 2013 by one year.

For the 2014-15 season there was uncertainty of his position within the club, given that he was not selected for the first league game over Alexandria graduate Fabian Campen and is rumored to be leaving the club. Aliyev joined MFC on the transfer deadline day for 1 million euros. 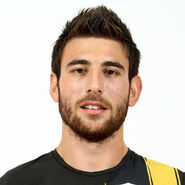 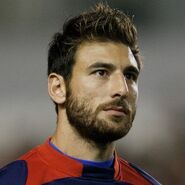 Mehmet Aliyev on a press conference
Add a photo to this gallery
Retrieved from "https://carrington.fandom.com/wiki/Mehmet_Aliyev?oldid=52067"
Community content is available under CC-BY-SA unless otherwise noted.