RFBA awards are awards given by the Royal Brunanter Football Association to clubs in both the First League and Second League.

The League Cup is the award given out to the champion of the First League.

The First League Player of the Season is an annual association football award presented to players in Brunant, which recognises the most outstanding player in the First League each season. The recipient is chosen by a panel assembled by the league's organiser – currently the Royal Brunanter Football Association – consisting of members of "football's governing bodies, the media and fans", and is announced after all games of the season. 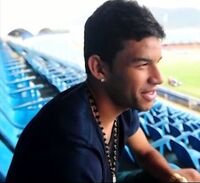 The Young Player Award is the Brunanter award to the best young player in either the RBFA leagues. Candidates must be 22 years or younger. Most of the winners have come from the First League.

Retrieved from "https://carrington.fandom.com/wiki/RBFA_awards?oldid=80771"
Community content is available under CC-BY-SA unless otherwise noted.