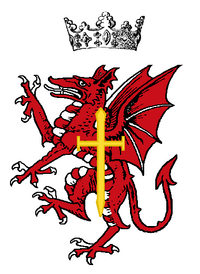 The Royal Guard is the land component of Brunant's armed forces. The Royal Guard is has existed for over 500 years and was historically an important military in the Mediterranean region. Nowadays the Guard fills a largely smaller role, but is still well-trained in order to deal with any issue. It is headed by General Gabriel Styler, as Head of the Royal Guard.

The first military units in Brunant were seen during the War of Independence in 1427. They were mostly conscripted men from Brunant. Later on, Swiss mercenaries were hired by the republicans to fight the better trained Venetians. During the time of the Brunanter Republic men there was not much need for a standing army, although men were occasionally recruited from the regions to serve in the military.

The Royal Guard itself was founded in 1482 as a guard to the Royal Family and the King. The Guard became a true military with the establishment of the Veldwachter (Field guards) in 1517. Modeled on the Swiss Guards and Landsknecht, the Veldwachter were professional soldiers who led the army into battle, ahead of the cavalry and infantry. Many of these served as mercenaries in Europe and were involved in the ill-fated Invasion of Rose Island in 1533, as well as in the fight against corsair pirates.

Under King Ambroos I, Brunant was largely in the anti-Napoleonic camp, over historical animosity with France, and rumors that his cousin, Hélène de Cettatie coveted his throne and was planning an invasion.

In 1813 a number of volunteers were sent by the king to assist the Spanish and British, reportedly fighting at the Battle of Castalla. Brunanter regulars were sent to France in early 1814 as part of the War of the Sixth Coalition, under the command of Owen Halsey MacLellan. Five official battles were fought, culminating in Toulouse in April 1814. In 1815, soldiers were again sent to continue fighting, in battles leading up to and after the famed Battle of Waterloo. Soldiers would be awarded the 1814 War Medal.

In May 1915, Brunant declared war on German after a period of prolonged neutrality. Brunanter troops were sent, first to Belgium and then to France in the summer of 1915, after limited conscription was introduced.

1600 soldiers were sent, with 1200 going to Champagne in France and 400 to Ypres in Belgium. The first Brunanter action took place at Ypres, where the situation was even dire. At Second Ypres, the 400 Brunanters took part in action at Frezenberg and Bellewaarde. At Frezenberg the 150 Brunanters fought bravely but there were only 36 survivors. At Bellewaarde there were 250 soldiers. On 24 May, the Germans launched a gas attack followed by rapid attacks. The Brunanters became unable to defend their positions and only nine soldiers survived from the infamous 8th Infantry Company.

Further action occurred on 25 September 1915, during the Second Battle of Champagne. At Champagne the gains were early on and minimal, and by 7 November there were 520 dead and 208 injured. For the rest of 1915 Brunant did not send more troops, as a consequence of such high casualties.

In April 1916, 2500 enlisted soldiers were sent to France. Their first action was at the Battle of Albert, the opening stage of the ill-fated Battle of the Somme. On 1st July there were some 780 Brunanter casualties with many dead mowed down by machine-gun fire. By the 13th there were 1500 casualties, including 815 dead. Subsequent action on the Somme would occur in September at the Battle of Flers-Courcelette, where another 600 would be injured or killed. The remaining troops were sent back to Brunant in November and December.

No further Brunanter troops would be sent to Europe until the summer of 1917. 2800 men were in Europe and their first action was at the Battle of Poelcappelle in October 9. 620 men died that day but there were only 118 wounded. The Brunanters spent the winter at Ypres and saw action again in April 1918 (Battle of the Lys, during the German's Spring Offensive. A further 860 soldiers were killed (plus 450 injured) during April, after which the survivors were sent home. In total 6900 soldiers served overseas, with nearly 4000 dead. This was the highest casualty rate in any war for Brunant, not even surpassed during World War II.

When Germany invaded Brunant in May 1941, the Royal Guard was tasked with Brunant's defense. But, the Germans advanced rapidly and overwhelmed all defenses. Much of the troops in Cape Cross Parish surrendered but most of the guard went south and was evacuated on naval and other ships to Alexandria, Egypt. This bold "Escape to Egypt", right under the German's noses was seen as a moral victory and morale-booster, as some 9,800 soldiers were able to escape, including their commander, General Frederick Schiller.

In Alexandria, the Brunanters were idle a few months, but were called up to participate in Operation Crusader. They marched through Egypt and Libya and joined British and allied troops in the relief of the Tobruk siege. They were active in the back-and-forth action in North Africa throughout 1941 through 1943, including the successful Second Battle of El Alamein. In late 1942, the Brunanters were linked up with the British First Army (also made up of U.S. and Free French forces) to participate in the Tunisian campaign. By May 1943, when Axis forces surrendered in Tunisia, some 980 Brunanter soldiers had died and 1080 were injured. For the next year, the Brunanters were back at Alexandria.

As a prelude to further operations in Europe, some 3000 American soldiers and 1000 Brunanters (from Alexandria) were used for the liberation of Brunant in July 1944. Barely a month after the invasion of Normandy, German defenses were lightened up and upon landfall the resistance rose up to actively fight the Germans. Following the rapid liberation, the remaining troops in Egypt were called upon to participate in Operation Dragoon, the invasion of France from the south. 5000 Brunanters took part in the initial invasions at Alpha Beach, near Cavalaire-sur-Mer. Linking up with U.S. troops, they advanced to Avignon and by September were in Lyon, which they were told to secure and defend in case of German counter-attacks. Out of Brunant's participants, there were only 478 dead and 490 wounded. In early December the troops were sent back to Brunant, in time for Christmas.

Since World War II, the Royal Guard has not engaged in any active fighting. During the height of the Cold War, Brunant set up the Intelligence Office to deal with any threats. The guard has been reduced in numbers, but with better equipment and technology available is much better prepared for action.

Brunant participated in Operation Desert Shield/Storm (Kuwait) and a number of UN missions in non-combat roles. 260 Brunanters served during the war, and the war saw one soldier injured.

From 2003 to 2008, some 350 Brunanter guardspeople went to Afghanistan alongside German troops to work on military strategy, training with Afghans and primarily communications, as part of the Euro-Atlantic Partnership Council. Brunanters were stationed in Kunduz Province, at the German Kunduz Base (Forward Operating Base Adriana) and were focused on non-combat roles. Despite this Brunanters had to engage Taliban insurgents on several occasions during the period.

One Brunanter, Sergeant David Barnes was killed during an exchange of fire on the night of June 3rd, 2006. Two others soldiers were injured between 2003 and 2008, one by an exploding mine. There was talk of returning to Afghanistan in 2010 or 2011 but eventually there was no consensus to do so.

Brunant was part of the Multinational Task Force in the Burenian Invasion of Lovia, assisting in non-combat humanitarian and deterrence missions. They were engaged by Burenian naval forces and forced to engage. Marine Guard Aleida Heymans was the only casualty of the war.

In 2016 the government announced the involvement of the Royal Guard in Phaluhm Phoueck, taking part in the fight against armed extremist terrorism in that country. 250 soldiers are being sent in non-combat role, in the Operation Martel. As of June 2017, three companies have been deployed in what is Brunant's longest conflict since the end of the Second World War.

In June 2017 a number of companies were reorganzied as purely support companies, in order to consolidate all support and logistics personnel instead of having them spread out over other companies as before.

There are presently 4570 members of the guard, including some 2500 reservists. All are extremely highly trained. Their usual uniform is a blue Parade Costume. However, they also have state-of the art camouflage uniforms with the latest weapons and technology to assist them. They are an extremely efficient army, and it is said that "one brave man has the strength of five regular men". The guards have very rigorous and intense training for 2 years.

The Royal Guard is primarily a ceremonial unit, but they utilize highly advanced techniques and weaponry to defeat outside threats when needed.

Their primary firearm used when on combat or guard detail is the SCAR-L, produced by Belgian company FN Herstal. They also utilize the heavier SCAR-H on certain occasions, such as when they are used to supplement light machine guns or for use as a Designated Marksman Rifle. The M-21 variant of the M-14 assault rifle is the primary weapon of the squad marksman, however. This is due to its relatively low cost and a long record of sucess, as well as a high degree of accuracy within the 50-400-meter range that Designated Marksmen are expected to excel at.

Several models of sidearms are used, but the primary service piece is the HK P30.

The standard uniform of the Royal Guard is a black battle dress, in use since the late 1960s, known as the Type 1 dress. Other units may wear different uniforms based on their requirements. For field exercises and combat operations, camouflage pattern uniforms are in use (Type 2). In 2009, a blue-green-beige digital pattern was introduced, replacing the 1990s-era camouflage pattern. Prior to this the 1961 disruptive camouflage pattern was introduced, designed by painter MC Weissmann. Formal events and parades require the use of the formal suit (Type 4), of which a dressed-down version with just the trousers and shirt is known as the Type 3. Parade guards units use blue 19th-century style dress with shako hats, the Type 5, which is the most formal of all the uniforms. 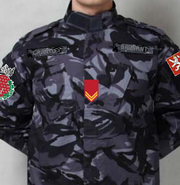 Uniform insignia
Add a photo to this gallery 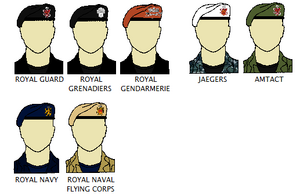 The standard guards beret is black with the Royal Guard insignia, with different colours and badges, which include black for the guard and Royal Grenadiers, orange for the Royal Gendarmerie, white for the Jaegers and olive green for AMTACT. Jaegers and AMTACT now use a specialized combat beret for most daily use.

The Royal Guard is composed of two regiments, one active and one reserve. The 1st Regiment includes three heavy infantry battalions, one mechanized/mobile unit, a light infantry unit (Jaegers) and special forces (AMTACT). Each battalion is further divided into companies of around 400 people. A significant reorganization of the Royal Guard is expected to occur in the next five years.

25th Support Company "Draco"
Add a photo to this gallery

The guard has several bases and installations across Brunant. Helmond Military Base is the largest, with a number of infantry and armoured units stationed there, as well as SEDEF's fast response units.

Other bases include Brunant Military Base and Middleton Military Base. The military further has personnel stationed at SEDEF headquarters, as well as the nearby Signals Station Castramont, where communications and intelligence is located.

Retrieved from "https://carrington.fandom.com/wiki/Royal_Guard?oldid=78386"
Community content is available under CC-BY-SA unless otherwise noted.