St. Marks Koningstad is one of three football clubs in Koningstad and one of the top teams in the AFC. It is based in The Port district. St. Marks is one of the most supported clubs in the nation and among the most successful, with 20 league wins and 14 cup and supercup wins. Their main rivals are Grijzestad Strijders, often referred to as the Eternal Rivals. 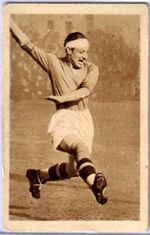 St. Marks' history dates to 1899 when workers of the Koningstad Shipping Company began playing recreational games against each other. To foster better cooperation and teamwork owner Johann Von Dreckt organized the workers into an official team in 1900. The name he chose was Alexandria Koningstad, in honor of his hero Alexander the Great. They played unofficially agains other teams, especially against Real Koningstad. From the start St. Marks was known as the workers team, while rivals Real Koningstad were supported by the rich. In 1908, the team became one of the four founding member of the AFC. They won both the 1910 and 1912 tournaments with star player Anders Losenberg, and came second in 1908 and 1911.

In 1912 Von Dreckt was persuaded to sell his club to Argentine businessman Carlos Garozzo. He had a stadium built for his players and named it "Buenos Aires" after his home town. Garozzo did not find huge successes in his early tenure as club president but St. Marks managed to come second in the league in 1915 and 1917. They also finished third in 1913, 1914, 1916 and 1919.

With superstars Daniel Patteron and Jos Hemings, the Green Giants began the 1980s by winning the 1st league, the King's cup and the Supercup, becoming only the third team (and the 1st one in Koningstad) to do so. In 1981, they won the league and with a third consecutive victory in 1982 became the first team in the country to do so. After this the club would experience a dry spell, only winning the league again in 1995, 2001 and most recently in 2010, making their total victories at 20. Since 1980 they would only win the Johan II Cup in 2003, and they have not won a Supercup in 17 years. In 2012 they sold superstar Ibra El-Zein to rivals Dortmund SFC for €10 million, but they brought in Brezonde youngster Carlinhos (for 5.5m €) to compensate. In 2012-13 the club are sitting in third place, with 6 wins, 5 draws, one loss and 23 points.

St. Marks participated in the Leaders League for wikination football clubs in 2012-13, making it to the quarter-finals.

In the 2013-14 First League, St. Marks have had a strong season, presently leading the league after 28 matches. St. Marks have x wins and are the top-scoring side in the league, with 80 in 28 matches. In the Cup, St. Marks made it to the Eighth-finals after leading their group, but were knocked out on aggregate 3-1 by Dortmund SFC. In the 2013-14 Leaders League topped their group with Kemburg City, Athina Sofasi and FC Donderar. St. Marks defeated Battery FC to make it to the semifinals, where they defeated Tattington Road 3-2 over both legs to face Kemburg City in the final. SMK drew 1-1 in the final, thanks to a Jefferson goal, and won 1-3 in penalties.

The club is believed to have agreed a deal for Traspesian defender Sergio Valdes, who will join the club with Carlinhos going the other direction.

St Marks plays at the Koningstadion in The Port, KS. The original club stadium, Buenos Aires, was built in 1912, and had a capacity of 12,400. It was demolished to make way for a new one in 1974. Their stadium seats 40,000 people, though it generally only reaches an attendance of 39,000 at the most.

St. Marks has almost always used striped green and red jerseys for its players. Up until the 1930s, St. Marks (and Alexandria) used an all-green kit. Beginning in 1940 the club adopted a new tradition whereby every 10 years the stripes would change from vertical to horizontal. Their kits were made by various Brunanter companies until 1963, when Adidas was selected to make them. Except for a brief period from 1978 and 1986 (where Joma and Puma made them) St. Marks' jerseys have all been Adidas. The current jersey has vertical green and white stripes with green sleeve ends. Their away kit is an all-white jersey with green shorts.

In March 2014 the club announced their next kit, which was a radical departure from their previous kits. They will switch manufacturer to Nike, and the shirt is the first not to feature the traditional stripes since 1940. The kit has generated a lot of controversy from some fans. For the 2016-17 season, horizontal stripes return to the home kit 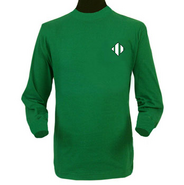 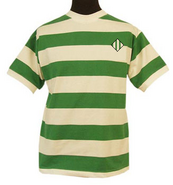 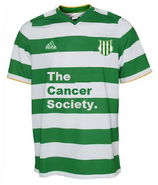 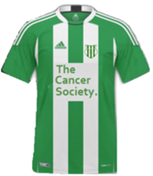 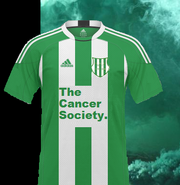 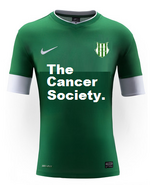 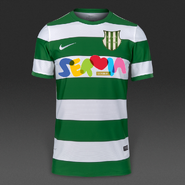 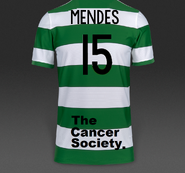 Up until 1921-22, St. Marks used no logo and the team was only marked by their green kits. Starting in the 1921-22 season they had a striped green rhombus logo which would be used until 1971. The number of stripes in the rhombus would change with new shirt designs, from as little as four to eight, which was the most common. In 1971, they introduced the first chield logo, similar to the one used today. This one was modified in 1980 for the clubs 80th anniversary and is the one in use now, albeit in a slightly modified version from 2016.

Shield logo, 1980 until now
Add a photo to this gallery

The first club sponsors for SMK was Brunant Telecom, who signed a deal in 1984. The next sponsor was Audi, who signed a five-year deal in 1988. In 1995 The Cancer Society became SMK's next sponsor and continue to this day. As a charity they do not pay for the advertising; instead St. Marks contributes to their charity and players often participate in benefits.

In 2016 Serbia tourism became the primary club sponsor, replacing the longtime Cancer Society logo at the front of their shirts. Their logo has now been moved to the rear of the shirt.

St. Marks Koningstad has had a number of rivalries throughout its history. Historically they were rivals to Real Koningstad, but since they folded the club has found new ones with FC Kings, Arabian FC and Dortmund SFC (see Koningstad Derby). Their biggest rivalry, and by far the most famous in Brunant is the "superclassic" between St. Marks and their "eternal rivals", Grijzestad Strijders.

St. Marks Koningstad is organised as a registered association. Unlike a limited company, it is not possible to purchase shares in the club, but only membership. Presently the club has 10400 members, who play 140 euros yearly for membership.

St. Marks is also known for having an excellent youth academy. Players such as Felix Brunner, Amadeus Veltman and more recently Samir Baizat have gone through their youth setup. The St. Marks academy has three teams of players, for 8-10, 11-13, and 14-16 year olds. As players progress through the ranks they are more likely to be noticed for professional football and after passing though the 14-16 years squad the better ones may be called up to the Alexandria Koningstad reserve team.

In 1956, St. Marks brought back the name Alexandria Koningstad for their secondary team. Alexandria initially played in local and informal matches, but in 1965 was re-organized into a semi-professional team. In 1971 they joined the Cape Cross Parish League but only managed average performances, with 6th place being their highest. In 1982, after a change in management they got to 1st place in their league. In the play-off round (2. Liga for promotion) Alexandria managed an unlikely win over Helmond RSC to take their spot in the league. Their inaugural season in top-level national competition went very dismally; they managed only 8th place and were just able to remain in the league. For 1983-84, they did even worse, with six straight losses and only one win. After coming in last, they lost their relegation game and were back in the parish league.

Since the 1990s, Alexandria Koningstad is mostly centered around youth players with a few more experienced ones holding the team together.

Players in bold are over 21 years old.

Retrieved from "https://carrington.fandom.com/wiki/St._Marks_Koningstad?oldid=77893"
Community content is available under CC-BY-SA unless otherwise noted.